Just over 150 years ago, Charles Astor Bristed was doubtless contemplating the start of term at Cambridge University. I’m doing the same, which is a reason for this blog, on the day the Freshers’ Week appears to begin for Graduates.

There are differences, though. Charles Astor Bristed was a very wealthy American (the clue is in that middle name). His grandfather was THE Astor, the one who put ‘Astor’ into the Waldorf Astoria. That meant that, at Cambridge, he could be a ‘Fellow Commoner’. This were the aristos who shared the considerable privileges of the College Fellows (and were, usually, a good deal wealthier than the academics). 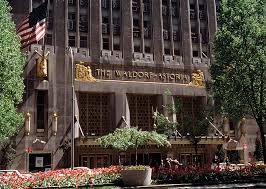 Charles Astor Bristed was at Trinity College where, after a first degree at Yale, he had hopes of the highest academic honours. He didn’t quite make that grade but he did write a richly detailed book about the life of Cambridge students at that time. His book ‘Five Years in an English University’ covers the period from 1840-1845. 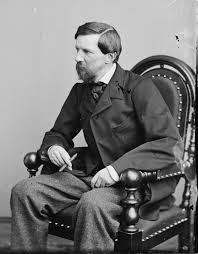 As usual it’s the drink bits that interest me. His general take on Cambridge drinking habits was that the wine was, mostly, “villainously doctored”; that the students tended to over-indulge (though he does qualify this by noting how intellectually and physically fit they mostly were); and that it was the punches and mixes of various kinds that did the damage – along with ‘strong wines’.

He recalls drinking bishop (at its most innocuous a spiced red wine), ‘silky’, “the component parts of which … appeared to be made of rum and madeira” and, of course, sherry cobbler. His claim to fame, indeed, was that he introduced it to Cambridge (and perhaps to England).

Sherry cobbler, basically a mix of sherry, fresh fruit and ice drunk through a reed (straws as we know them weren’t invented until the 1890s) was almost certainly created in America. There’s a reference in Washington Irving’s 1809 ‘Knickerbocker’s History of New York’ which credits it to the Marylanders. But it didn’t get much other notice until it took England by storm in the 1840s.

Charles Dickens gave the sherry cobbler a big endorsement in his novel Martin Chuzzlewit (serialised in the mid-1840s). Here’s his description of the American reviver prescribed for Martin by his friend Mark Tapley – one of the rather few aspects of American life that appealed to Dickens:

“He produced a very large tumbler, piled up to the brim with little blocks of clear transparent ice, through which one or two thin slices of lemon, and a golden liquid of delicious appearance, appealed from the still depths below, to the loving eye of the spectator.

‘What do you call this?’ said Martin.

But Mr. Tapley made no answer; merely plunging a reed into the mixture — which caused a pleasant commotion among the pieces of ice — and signifying by an expressive gesture that it was to be pumped up through that agency by the enraptured drinker.

Martin took the glass with an astonished look; applied his lips to the reed; and cast up his eyes once in ecstasy. He paused no more until the goblet was drained to the last drop.

By the 1860s, cobblers were hugely popular. The Lake Wenham Ice company (“a party of speculating gentlemen”), which first shipped to England in 1844, promoted the drink. According to the 1871 edition of Oxford Night Caps, their ‘vertigo’ inducing recipe was as follows:

Pound a small quantity of ice quite fine by wrapping it in a coarse cloth and beating it with a mallet or rolling pin. Half fill a large tumbler with this powdered ice, add a teaspoon and a half of pounded sugar, two or three pieces of the outer rind of a lemon, and a wine glass and a half of sherry. (Throw in half a dozen strawberries, if in season.) Fill up with pounded ice. Mix by pouring rapidly from one tumbler to another several times. Drink through a straw. 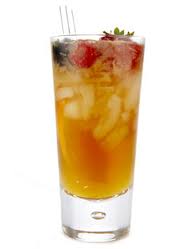 Charles Astor Bristed did not give a recipe in his original book (though there is a version in his 1852 ‘The Upper Ten Thousand; sketches of American Society, by a New Yorker’.  He too stressed the importance of lemon peel (than slices of lemon, “nothing could be more destructive”, so perhaps Dickens got it wrong).

Cocktail experts credit the cobbler as “the force that propelled cocktail shakers into every bar of any size” and the three piece shaker is still known as the ‘cobbler shaker’.

I followed the ‘Esquire’ recipe which sticks to slices of orange and a raspberry or two on top. It was delicious, though with a Fino sherry more sugar was needed. It would have been even better if the temperature outside was not rather below the seasonal average. Oh well, something for next summer.

One last Bristed observation which I find very encouraging (even empowering):

“Young ladies sometimes picture to themselves students as delicate pale youths who live on toast and tea. Never was there a great mistake, Men who study in earnest eat in earnest.” What more justification is required…

Posted in Student life, What I've been drinking