Into the lions’ cage | adman wins a champagne bet

On 11th October 1890, The Oxford Journal reported that Mr James Dillon, an Irish ‘advertising agent’ had wagered £100 that he could enter the lions’ cage and “drink his share of a bottle of champagne before leaving.”

Thanks to the assistance of Muccomo (described as the ‘coloured lion tamer’) with both the lions and the champagne he succeeded.

Champagne was often part of 19th century wagers. If it wasn’t the ‘fumes’ of the drink that provoked some extravagant or intemperate behaviour, it was often the prize at stake. In February 1880, the South Shields Gazette featured a bet (for a sum unrecorded) that turned on the ability to drink a glass of champagne from an unopened bottle without piercing the cork or breaking the glass. It was won by the simple expedient of turning the bottle upside down and drinking from the punt (described here as “the hollow at the bottom”). 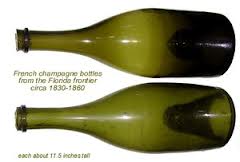 19th century French champagne bottles showing the depth of the ‘punt’. Thanks to the Naked Winery for this image

END_OF_DOCUMENT_TOKEN_TO_BE_REPLACED

Posted in On this day