You can tell by the smallness of the glass how precious the contents were’: wine glass size in the 19th century

As part of their Christmas 2017 edition, the British Medical Journal published a fascinating article looking at ‘Wine glass size in England from 1700 to 2017’ and asking whether ‘downsizing can reduce alcohol consumption. The answer, based on a range of studies, seems to be yes – but that’s not the focus of this post.

The article by Theresa Marteau and colleagues at Cambridge University obtained measurements of 411 different wine glasses dating from the 1700 to the present day. Their conclusion was that glass size has increased sevenfold in around 300 years with by far the greatest increases in size coming in the last thirty years or so. For the article and data go to http://www.bmj.com/content/bmj/359/bmj.j5623.full.pdf. It’s well worth reading. But it was their graphic (reproduced with permission below) that set me thinking and checking my own data for nineteenth-century.

The Cambridge team’s data shows a slow rise from 1700 to the late nineteenth century before the growth in capacity appears to level off slightly before beginning to rise again during and after the Second World War. 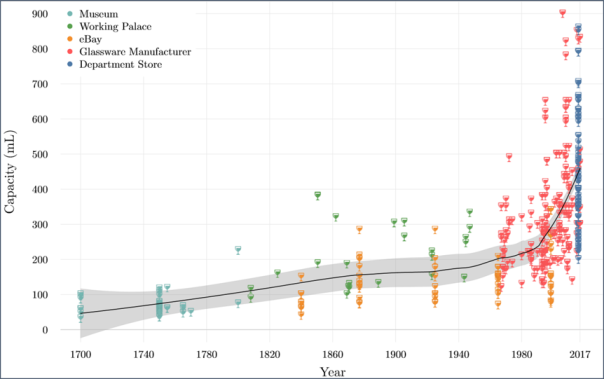 However, they are not the first to consider glass size as an indicator of consumer behaviour. In 1861, there was an editorial in The Times which made a rather similar point about the growth in size. Talking about the new-found enthusiasm for wine produced by Gladstone’s budgets of 1860 and 1861 which drastically cut the duties on wine and kick-started a consumer boom, the paper noted first the shift to new types of wine. Claiming (rightly) that ‘there is no limit to the variety of flavour, substance, and quality at our command’, they suggested that future historians (i.e. people like me) would think it a ‘curious characteristic that in England once upon a time, the only wines known were port and sherry, and that both of were luxuries’. They further observed that in the eighteenth and early nineteenth century:

Wine, in fact, was not a beverage, but a liqueur. It was at once too strong and too dear. Nobody could take it at meal-times in the ordinary way of drink, and few could afford to consume it by pints, or half-pints, or at draught. It was preserved carefully in a decanter, and brought out of the cupboard on holydays and measured into glasses carefully sized. An English wine-glass of the last century tells its own tale, like the salt-cellar of an old Indian dinner service. You see by the smallness of the article how precious the contents were thought.

Times, they inferred, were changing and with them the size of wine glass. Other comments in the 1860s and 1870s backed them up and suggest that wine bars of the period were just as conscious as their twenty-first century counterparts of the glass size effect in increasing consumption and sales. In 1868, the popular wine writer Edward Beckwith warned his readers that glass sizes were increasing and instructed his readers to give a ‘timely and not quite unnecessary instruction to the officiating domestic’ not to fill the glass to the brim. His concern appeared to be that a brimming glass adversely affected the drinking experience. taste.  Commercial venues got into the larger glass act. In 1870, an advertising ‘puff’ in the London City Press noted of the flourishing ‘Bodega’ chain of wine bars that they used a ‘dock tasting glass’ more than double the size of the ‘ordinary glass’. Doctor Frederick Anstie, writing in 1877 of his concern that ‘young dancing ladies’ might unknowingly over-indulge warned that’ of late years there has been a marked tendency to make [glasses] larger the formerly’. The London Standard (possibly after a glance at the cuttings library) reiterated The Times’ 1861 point  in an 1882 article. Talking of champagne, they wrote that in the early part of the century:

the precious wine was poured into a prolonged thimble, in which froth largely predominated. In fact, you were intended to sip rather than to drink it. That would seem to us now an odious and churlish custom. […] Now the demand is for big spacious glasses.

By then the ‘tall, old-fashioned champagne glasses’ were only fit for filling with ‘pretty moss’ as part of a flower arrangement –  or so thought the Aberdeen Journal in 1880.

It’s possible that the Cambridge data has been slightly skewed by the continued presence in the market of smaller-size port glasses, for which the standard size remained at 2 fluid ounces (around 50 ml) for many years.

But, it seems probable that the size of ‘standard’ wine glasses increased during the wine boom of the 1860s and early 1870s; certainly the size of champagne glasses did. To quote the Aberdeen Journal again; this time from an 1888 article on the economics of hotels and restaurants:

the restaurant-keeper is making a golden harvest by the sale of wine. He can well afford to give a tempting and luxurious dinner at a few shillings a head when he knows that champagne will be freely used at it. A good bottle of champagne is not now to be had at a restaurant under twelve or fifteen shillings, and then the wine-glasses which are cunningly adopted are very large, one bottle filling about four glasses, so that relays of champagne are necessary.

Translated to old imperial measures and bottle sizes that meant close to half-pint glasses. And another thing. Restaurateurs preferred to serve lighter champagnes, which meant Chardonnay-driven blends rather than the stronger, black grape wines dominated by Pinot Noir. A customer would be satisfied with one bottle of the black grape blends but would take two of the Chardonnay-dominated wines. But that’s another story for another time.