In the last couple of days there’s  been a fuss in the British press about ‘prosecco on tap’. There are plenty of bars up and down the land where this has been on offer for the last year or so. Now the Consorzio de Conegliano Valdobbiadene have threatened to take the venues to court. EU rules say prosecco (like champagne) can only be sold from the bottle. The Italians claim that drinking it from a tap causes confusion and damages their sales. But there’s a rather fine Pommery precedent from the 1920s…

First, a bit of background. The UK director of Frizzenti, Daniel Spinath, accepts that the wine his company distributes cannot be called ‘processo on  tap’, though it’s perfectly legal to sell sparkling wine from the Glera grape (i.e. Prosecco) in  just that way. But, as he says, not many people know that prosecco comes from Glera grapes.

Step back a hundred years and more and fizz on tap was to  also to be found in London. The Bodega chain of wine bars – set up in 1868 by a serial entrepreneur named Robert Lavery and floated in the 1880s – had its own brand champagne on tap. They registered a dispensing device for the purpose as well as a wonderfully ornate wine-cooler.

Not a cooler but a much classier champagne tap was this wonderful device created by Pommery and used at grand cellar dinners in the 1920s. The tap was in the form of a swan’s beak and men in the cellar down below were emptying magnums of Pommery into reservoirs as fast as they could go. This is the way to take your champagne on tap I suggest – though probably not allowed today. 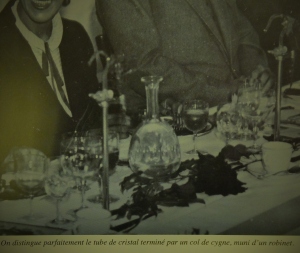 This entry was posted in The Miscellany and tagged Bodega, Pommery. Bookmark the permalink.