The poetry of Algernon Swinburne was written to shock Victorian morals and moralisers. He sang of Lesbianism and boasted of his own bestialising tendencies. He was certainly addicted to drink and (probably) flagellation. Just how perverted his sexual tastes were, is a matter of debate.

NPG 4888; Theodore Watts-DuntonAccording to Oscar Wilde, he was merely a ‘braggart in matters of vice, who [did] everything he could to convince his fellow citizens of his homosexuality and bestiality without being in the slightest degree a homosexual or a bestialiser’. 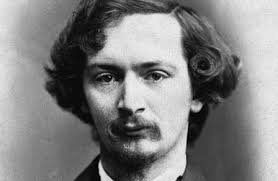 But alcohol certainly was a vice. He was first treated for alcohol problems in 1861 (when he was in his early twenties) and by the late 1870s he was addicted to brandy. His life was saved by his lawyer, Theodore Watts (later Watts-Dunton) who took the poet into his own household in Putney, ‘The Pines’ (named not after gloomy trees but on account of the carved pineapples on the gateposts) and thereafter acted. ‘with lovable guile’ as loving friend and solicitous warder.

Watts regarded Swinburne as a wayward, childlike genius who needed to be rescued from his own excesses. Some have argued that Watts ‘saved the man and killed the poet’, but, against this, John Walsh has pointed to the remarkable work – e.g. the epic poem Tristram of Lyonesse – produced by Swinburne in this later period of his life. Swinburne lived peacefully with Watts (and the latter’s wife) until his death in 1909.

Crucial to this life was Watts-Dunton’s strategy for weaning Swinburne off alcohol, a strategy described by the popular English novelist, Coulson Kernahan.

Watts-Dunton’s opening gambit was to by tell Swinburne that brandy ‘isn’t a drink in any real sense of the word, it’s [only for] sick-rooms, as well as wretched (and retching) Cockney travellers on a Channel steamer on a rough crossing’. Instead, he suggested port on the grounds that ‘they tell me that old Tennyson never drinks less than a bottle of port a day, and that its generous life-giving qualities make another man of him, set his brain newly afire and singing. A bottle of Tennyson’s favourite brand of port is brought from the cellar and they drink Tennyson’s health.

Thus, ‘brandy disappeared from Swinburne’s table, and for a month or more the two friends – one quaffing generously, the other sipping more cautiously – drank port together.’ But then Watts-Dunton says that he has begun to’ find port a trifle heavy’. Why not, he suggests, switch to Burgundy. A wine grower has assured him that Burgundy is the ‘best of all drinks in a climate like ours, [since] it is lighter than port, which is apt to clog the liver unless you are sparing with it’ Burgundy is not only ‘blood-making, nerve-strengthening, body-building, brain-firing’ but, more than that, ‘it’s the wine that Dumas’ immortal Three Musketeers […] thrived on, made love on, fought on; and, most of all […] it is the wine of La Belle France.’ So, they sample a bottle at lunch and ‘drink to Dumas and the immortal three’.

The next step in Watts-Dunton’s strategy was to switch Swinburne to claret, lighter in alcohol and perceived by Victorians as less likely to inflame the passions. Again the tactic was to appeal to Swinburne’s sense of himself as a man apart from the common run of humanity. Claret, Watts-Dunton tells him, is the wine that ‘gentlemen drink’. ‘The canaille, won’t, so I’m told, touch claret. Only an educated taste, only the palate of a connoisseur, can appreciate it. There is no other wine in the world, which, in bouquet, in fragrance, in delicate and delicious flavour and aroma, can for a moment compare with the best claret.’

And, you’ve guessed it, the final step was to transfer Swinburne to bottled beer. In this case the appeal was to patriotism. ‘Wherever you are, you should drink the “wine of the country”’ was Watts-Dunton’s line. Were they living in Germany then they should drink hock, in Scotland whisky. But they were in England and therefore they should drink ‘the most refreshing, appetizing, stimulating, healthiest, best and most natural all drinks for an Englishman [which] is our own glorious and incomparable British beer’. A swift Shakespearean reference sealed the deal and Swinburne lived out his days on a regular bottle or two of Bass pale ale.

Bass in the 19th century – courtesy of Craft Beer and Brewing

There was no consensus on the treatment of alcoholics in the nineteenth century. Doctors were split between moral and medicinal modes of reform but generally emphasised abstinence, often enforced via confinement in healthy and stable settings – precisely what Watts-Dunton’s household provided for Swinburne. Modern research suggests that many problems with alcohol can be resolved without formal treatment. Work by Linda Sobell and others has shown that the loving and dedicated support of friends and family is central to achieving control over alcoholism. The literary gilding of the temperate lily that Watts-Dunton supplied was hardly general but it was undeniably effective. And, if you believe Walsh, the treatment did not ‘kill the poet’.

This entry was posted in Uncategorized. Bookmark the permalink.