4th August 2013 seems like a good date to launch this blog since – by some accounts – it’s precisely 320 years since Benedictine monk Dom Pérignon reputedly ‘invented’ champagne in 1693. Others say June 1694 but I’m too late or too early for that.

I’m heading back to University this autumn to do a Masters’ Degree on the ‘Perception and Marketing of Champagne in Victorian England’ so this date has a special resonance for me. And Dom P himself is yet another entry in the catalogue of marvellous myths, brand management, white lies, counterfeit labels and dubious brands that make up much of the history of champagne when you leave the relative safety of the ‘celebrated brands’ that we recognise and salute today.

The legend of the blind monk calling out to his confrères “come brothers, hurry, for I am seeing stars” was – in essence – created in the late 19th century. If champagne were the wine of a man of God then its day to day associations with loose women, aristocratic excess and ‘Champagne Charlies‘ of all classes might safely be put to one side and champagne could begin its shift from a wine of public sociability and conspicuous consumption to one that embraces and celebrates the most intimate of occasions. The papers have not yet reported on what brand Prince Charles chose for the few glasses he took to whet baby George’s head. Pol Roger was William and Kate’s wedding choice; Bollinger Queen Victoria’s favourite. Not Dom Pérignon alas.

The myth(s) suggest variously that Dom P decided to use corks rather than wooden stoppers wrapped in canvas and that he put the bubbles into the bubbly, He may well have been a great blender, though probably of the still wines for which his Abbey was famous. Perhaps (said cricket commentator and wine writer John Arlott), he was the first to carry out the full process of “blending, bottling, corking and cellaring champagne of good quality, through secondary fermentation to sparkling maturity”. But it was an English doctor and scientist, Christopher Merret, who is thought to have been the first to demonstrate (in his Royal Society lecture of 1662) how adding sugar or molasses triggered the second fermentation and thus creating the foaming wine.

That’s why you may, in 2011, have seen Merret suggested as a generic name for English sparkling wine (the term ‘champagne is very tightly policed by the Champenois). Another front runner was Britagne; Camilla, Duchess of Cornwall, helpfully said why not just use ‘champagne’ – with the effect (and possibly the intention) of upsetting the French.

The Pérignon link had been used sporadically since the 1860s but his status as champagne’s inventor comes from promotional activity of the late 19th century, when the industry started to hit difficult times. The myth did not really get going until the early years of the 20th century when a reconstruction of his Hautvilliers Abbey stillroom was created for the Brussels Universal Exposition in 1910 – the same year as the first statue to Dom P was erected at Epernay.

He might have appreciated the statue; possibly not have appreciated the Dom Pérignon Vintage 1998 The Collection. Recipes from top end chefs – think Angela Hartnett and Tom Aikens – are paired with 1998 Dom Pérignon in what is billed as the world’s most expensive cookbook. £1000 each for a limited edition of 30 bound in sea-green Galuchat leather, sourced from a rare Japanese fish. It’s certainly excess of a sort.

As is the ‘Press for Champagne’ button I encountered at London Restaurant Bob Bob Ricard last week. However, the Benedictine Rule that Dom Pérignon would have lived by does allow for a hemina of wine per day (about half a pint) and BBR does stock the 2003 Dom Pérignon at a not unreasonable £162 per bottle. I did not indulge. 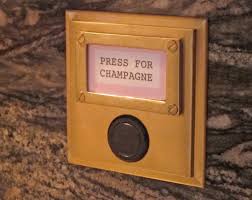 This entry was posted in On this day and tagged brand, bubbles, champagne, cork, vintage. Bookmark the permalink.